The other subject is the bust of Grand Duke Wilhelm Ernst of Saxe-Weimar. Again, the first four photos show the basic blocking of mid-tones as well as the beginnings of the gold lace, tombak helm and epaulettes. The blue tunic is a mixture of Sevres Blue, Indigo and Prussian Blue. The Indigo is really used to "grey" the blue a touch and for shadows. The feathers of the helmet are started with light grey and a bit of subtle shadows on the inside. 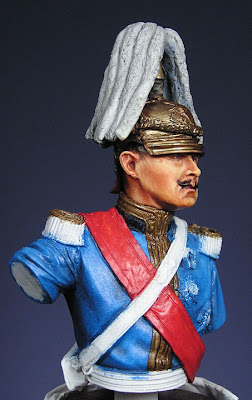 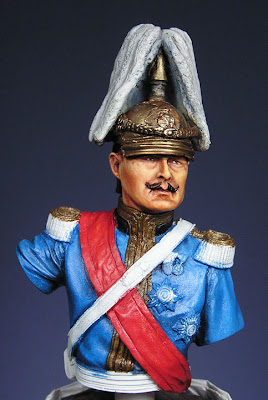 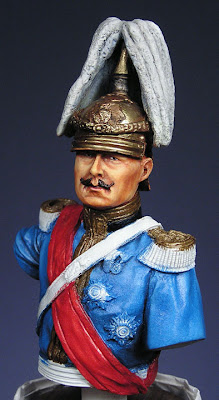 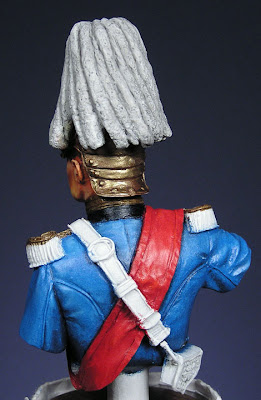 As with Zeppelin, All of the various silver bits whether they are cloth or metallic, begin with a base mix of silver inks and Mars Black oils. Washes and glazing of black will be used to pop out the details prior to highlighting. Quite a ways to go on both but progress is being made. 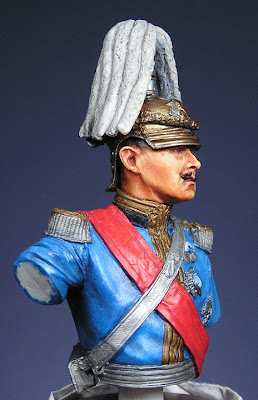 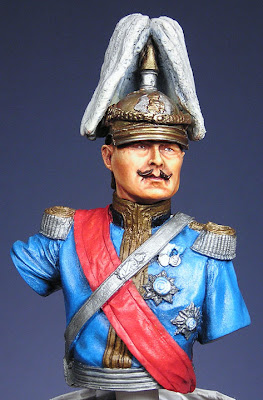 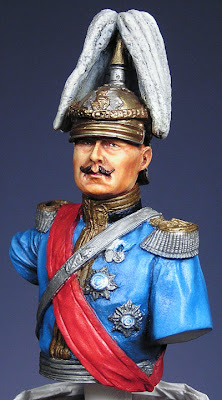 Posted by Jim Johnston at 11:13 PM No comments:

Two very overdue reports on projects, the first being Ferdinand Graf v. Zeppelin. The first three photos below show the start of blocking in colors and subtle mid tone shading that doesn't really show well in pictures. The uniform is Prussian Blue with a bit of Indigo and Mars Black added. The reds are mixes using Cadmium Red Light, Medium and Deep with both the red of the cape and the blue of the tunic blended into the black on the bottom of the bust as a transition. 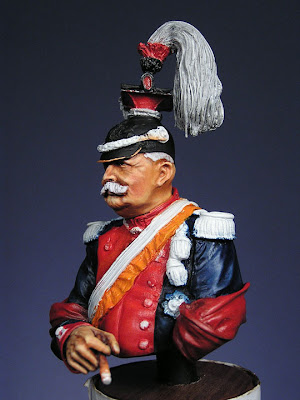 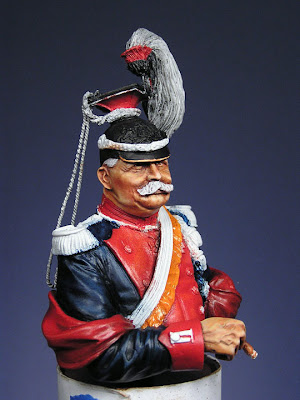 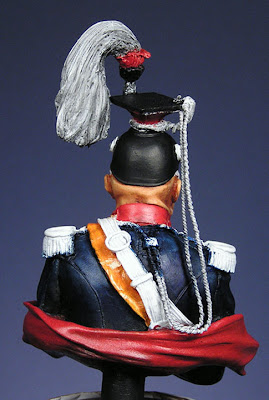 The three photos below show my continued adding of colored undercoats as I begin to build up my tones. More work has been done on the cape and the plastron of the Uhlan tunic. A mix of silver printers inks and Mars Black has been applied to the cords, tassels, crest, awards, sash and buttons as a base coat. I will apply some washes and glazes of black for depth and then start highlighting with the silver ink.

Deeper shading of the sash was done with the same orange and a bit of Prussian Blue to darken the color. These decisions are where a good knowledge of the color wheel comes in handy. I shade yellow with purple, orange with blue and green is used on reds as these colors are directly across from one another on the wheel. This allows for wet-on-wet blending where appropriate.

My next steps will be overall deep shadow tones before building highlights. 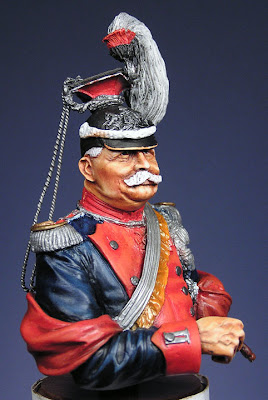 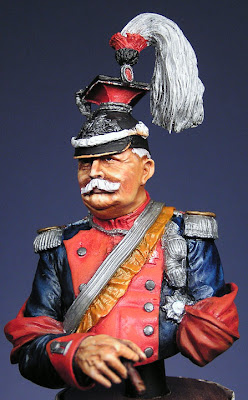 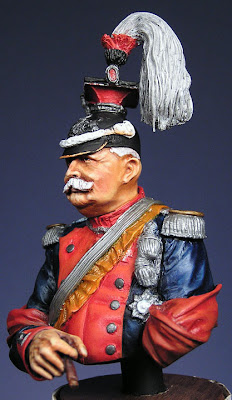 Posted by Jim Johnston at 10:58 PM No comments:

I have been working on two busts from Ulrich Puchala's line of Imperial German subjects. The first is Ferdinand Graf v. Zeppelin in his uniform as General der Kavallerie of Uhlan-Regt. No. 19. Both busts are at about the same point with the flesh just completed and work beginning on the uniforms. I am a bit further along on Zeppelin. The photos below show the progression of flesh painting. Nothing new here and followers of my blog will know the colors used by now. Basically what you see below is mid-tones, shadow tones and final highlights in their stages. 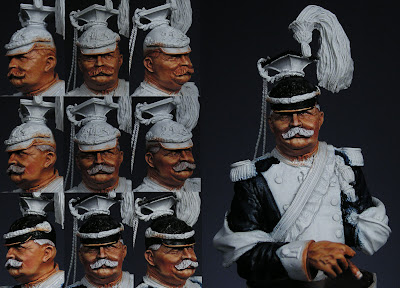 The second bust is Grand Duke Wilhelm Ernst v. Sachsen-Weimar in the uniform of General der Kavallerie des Karabinier Reg. 2. Same process as above. The uniform coat will be a wonderful mid blue. 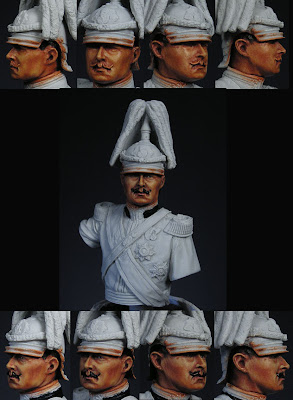 From this point forward I will probably separate out the posts on these busts. With the flesh completed the focus on uniforms and equipment details will begin. My focus will be on one bust at a time until completed.
Posted by Jim Johnston at 5:30 PM 1 comment: